For me this is where the flat season really gets going.

Most horses have had their first run of the season and blown away the winter cobwebs. The form book really starts to open up. The first month of the Flat season is always hard as horses need a run or haven’t been in training for long.

The form book can be that bit more trusted at York as the flat season is well underway.

What a 3 days we have coming up. This is one of my favourite festivals mainly down to the fact we have made decent profit over the last 3 years.

40 points profit over the last 3 year. 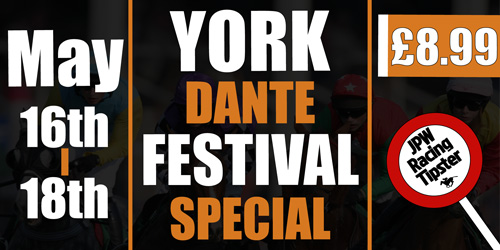 York is a course I have great success at and really suits the way I read the form book, as results have shown in the past.

The weather forecast is lovely all week and the ground is going to be perfect. The best horses normally win on the better ground which fills me with even more confidence this week.

What have we got coming up?

The main race of day one is the Duke Of York Clipper Logistic Stakes where a big star is on show in HARRY ANGEL. I have heard so much about this horse over the winter and what he is going to do as a 4 year old. Can he live up to expectations?

He has 2017 winner Tasleet in his way who is getting 5lb off the favourite He won’t make it easy for him and it is going to be a great race to watch.

We also have the fillies Group 3, Tattersalla Musidora Stakes. We have some very well bred 3 year olds who are entered in The Oaks on Derby weekend. Can any of them make a mark on the Oaks market?

Day One is also full of some tough handicaps and plenty of value is around.

The second race of the day is the Infinity Tyres Handicap. A race in which we had 25/1 winner Al Qahwa. Can we repeat that success in the race this year?

The race of the 3 days and a race which gives us a big clue for the Epsom Derby, The Dante Stakes.

This race has been won by Golden Horn, Authorized and Motivator in the last 15 years who have all gone on to win the Derby. It has also prodcued many placed horses.

This year we have the likes of Roaring Lion who heads the market. Will he improve for the step up in trip? He travels so well through his races and ran a cracker in the 2000 guineas to finish 5th. Will 1m 2f be the making of him?

On the same day is the Group 2 Middleton Fillies Stakes which has a fantastic line up. The favourite is Coronet who was the winner of the Ribblesdale Stakes at Royal Ascot last year. Can Mori turn that form around or can anything else have a say in the race?

On the same day the also have some very competitive races which includes another of my favourite races with the EBF Westow Stakes over 5 furlongs. With the forecast I wonder if we could see any track records being broken?

The Yorkshire Cup over 1m 6f is the race of the day and what a race that is going to be. Stradivarius is the red hot favourite but he is having his first start of the season. It won’t be easy in this very competitive race, over nearly 2 miles.

On the same day we also have two top class Fillies Listed races. Plenty of value around and another great day on the Knavesmire.

A horse to keep an eye on this week?

I am really looking forward to seeing MORI on Thursday in the Middleton Stakes. Her breeding is impeccable and although she went off the boil at the end of last season, both efforts were on bad ground. She was made a non runner at Goodwood 10 days ago because of unsuitable ground ( Good To Soft) which confirms why she went off the boil in bad ground last season. She also clearly had a few breathing problems as she has had a wind operation over the winter which could improve her massively. I really don’t think we have seen the best of MORI and I think she will come into her own this season. She is still lightly race with only 6 starts so has so much more to come.

I always go through the David O’Meara runners to see if I can spot anything particularly at York as he is normally up to something. The horse who stands out is a horse called AL QAHWA who recently came over from Ireland from Mick Halfords yard. You may recall at the start of the season David O’Meara winning the Lincoln with Bravery. Bravery was having his first run for David O’Meara from Aiden O’Brien and dropped him in trip which brought out improvement. He is doing the same with AL QAHWA here who was running over 1m on his last 2 starts in Ireland last season. He is now back down to 6f and making his handicap debut. He is only a 4 year old who was gelded at the end of last season and for David O’Meara to bring a 4 year old to this race to have his handicap debut, they must fancy him. His form last season was half decent behind some horses who are now rated 105+. This makes the mark of 94 look workable especially with improvement to come from 3 – 4 year old. Shelly Birkett takes the ride and she will be claiming a further 3lb. AL QAHWA will carry a lovely weight of 8st 10lb. E/W. WON 25/1

Can I get involved for the York Dante Festival?

We are running a York Dante Festival over the 3 days for £8.99. We cover the festival with extensive write ups and analysis with no stone left unturned.

It is a festival which has been kind to us in the past and with our record of 49/59 in profit, apart from the odd festival here and there, we are known as the festival kings. I think our record of over 80% in profit speaks for itself.

The text message will include the horses name, time of race and odds so you can place bet quickly and efficiently without losing any prices.

Get yourself signed up it is a great 3 days and one I am confident we will come away with profit.

Sign up to receive texts throughout the Festival, by text and email, for just
£8.99 – that’s only £2.99 per day!
Subscribe