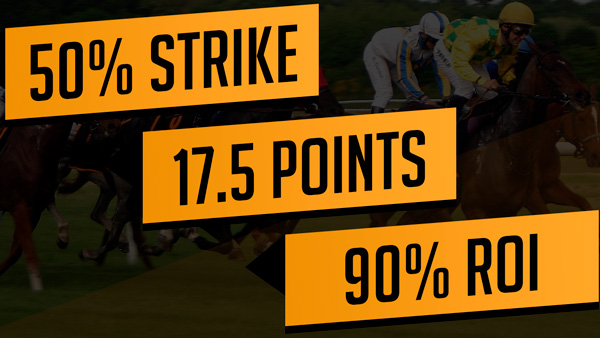 What a festival the York Dante was!

We quickly put Chester behind us where, although it was a loss, we went close with 9 E/W bets from 20 tips.

We are widely known within the industry as the festival kings and we showed this at the York Dante Festival.

Throughout the 3 days we gave 19 tips, with five being winners and four each way bets and came away with these key stats…

Next up is Royal Ascot which, again, we smashed to bits last season coming away with 29 points profit. This is not a festival to be missed and you can get full comprehensive analysis and tips, for all 5 days for £12.99.

We also run a 1 Year Festival Package which covers 16 festivals throughout the year for £95.

We are over 60 points profit for 2018 and are heading for the 5th month of profit in a row.

Day One was a great day with 2 winners and 3 E/W bets.

​​​​​​​We got off to a great start with HAMADA doing the business in the very first race. He won by a head but I still think he has so much more improvement to come. HAMADA only returned on the 28th April from a 572 day break and is 2 from 2 since his return.

He is also only a 4 year old, lightly raced with 5 runs career runs. The handicapper rates him at 96 but I still think he could improve past that. For me he is a horse worth going in the notebook as I can see him winning next time out.

We were back with more profit in the 2nd race of the day as both OUT DO and DANZENO hit the frame at odds of 11/1 and 14/1 to give us some nice e/w returns. I was mega confident with OUT DO as he had everything in his favour but he came up against a horse in George Bowen, who improved massively to win by 6 lengths.

​​​​​​​The day was not finished as in our final race of the day we tipped 1st and 2nd with GIVE AND TAKE (4/1) and DANCING BRAVE BEAR (16/1 E/W). This was probably my favourite race of the day as I read it perfectly. So many horses in this race would not like condition or wanted further. We spotted this and managed the 1st and 2nd.

We back in again the winners enclosure on the very first race with EL ASTRONAUTE (10/1). Some people in the industry said they couldn’t believe he won off a mark of 98 carrying 9st 4lb. If they done their homework they would’ve noticed that on his last start the horse finished 3rd at Chester and lost a shoe before the race even started. To lose a shoe and finish 3rd means he was slightly ahead of the handicapper.

That is the difference in this tipping game. I go that extra mile to find an edge and was the only one who picked up on the horse losing a shoe on his previous start.

It wasn’t long before we were in the winners enclosure again as ROARING LION won like a very good horse in the York Dante Stakes. It was a huge performance and it looks like to Derby is on the cards for the horse. He improved so much for the step up in trip and I think he may well improve further.

LARCHMONT LAD then gave us more E/W returns finishing 3rd at an advised 12/1.

​​​​​​​Whatever happened in Day 3 that was profit secured for the festival.

​​​​​​​Not the greatest day of the festival but we returned with one winner and broke even of the day with THUNDERING BLUE. He won with a bit in hand at 3/1 but we found the value the night before at 5/1. It was a great end to a great festival.

Any horse to take out of the festival?

Plenty of horses to take out of festival but on a personal level I have 3 horses I will be following.

HAMADA as I feel he has much more to come. To be off the track for 582 days and return with 2 wins tells me the horses is still improving fast.

ROARING LION has a huge task on his hands against Saxon Warrior in the Derby but he is a horse who improved massively for the step up in trip. At 6/1 E/W he is massive value.

LINE OF REASON is down to a handicap mark of 90 and if he gets his fast ground on his next two starts he is likely to go close. He finished 7th of 18 and has been dropped 2lb. I wouldn’t be surprised if they dropped him in on bad ground next time to come down the handicap and then go for the win the race after.

This is not one to be missed. We have made huge profits at the festival over the last 3 years.

Next up is Royal Ascot which, again, we smashed to bits last season coming away with 29 points profit. This is not a festival to be missed and you can get full comprehensive analysis and tips, for all 5 days for £12.99.

Are you a new customer?

Sign up to our 28 Day Trial for just £2.99. During these 28 days you will receive your tips via text message and by email. You’ll also have access to your members area with your unique login address where you can read all of the write ups and logic behind our chosen selections.

Receive 20% discount when you enter the following code in the coupon box
when signing up: