Our form is red hot and we have been consistently doing it the whole of 2020 if I am being honest, bar a month or two which were below par.

Our figures tell the story on our Weekends and Festivals Package which covers 52 weekends a year and 16 festivals through the year.

We have now made 103.6 points profit on our Weekends and Festivals and operating at a fantastic return on investment of 20.14%.

Absolutely fantastic figures and I would say the best in the industry over Weekends and Festivals.

Anyone who would like to get our Weekend and Festivals can get 33% OFF 3 month, 6 month and 1 year packages, using discount code – JPWRACINGTIPSTER33 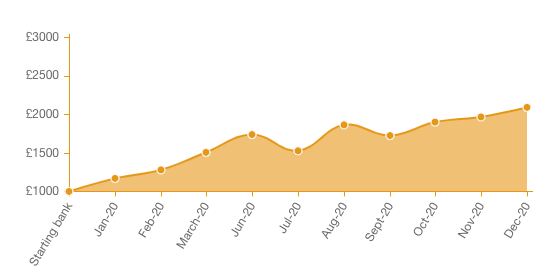 TODAYS FREE TIPS
1:50 Cheltenham
MASTER TOMMYTUCKER 8/1 generally – 1 POINT E/W (6 places, 1/5 odds)
CHATHAM STREET LAD 14/1 generally – 0.375 POINTS E/W (6 places, 1/5 odds)
ANNIE MC 22/1 generally – 0.375 POINTS E/W (6 places, 1/5 odds)
The money is coming for Al Dancer who we were on in the Paddy Power Gold Cup but he got tired late on. Although I think a lot of the horse, I think the price has now gone and I am not willing to take a chance when I think he may have stamina issues at Cheltenham, over this trip. He could prove me wrong but ultimately I have to feel the price is right. If I were to see him drift to around 7/1 – 8/1 (unlikely), I may get involved.
We have three selections to take the field on with in MASTER TOMMYTUCKER, CHATHAM STREET LAD and ANNIE MC, all which I believe are very good value.
MASTER TOMMYTUCKER has finally put it all together and looked a very good horse when winning at Haydock 3 weeks ago. He beat another of today’s runners in Good Boy Bobby and jumped impeccably throughout. If I am being honest, it was a performance which led me to believe he could be an outsider in the Ryanair Chase. If I think he has an outside chance in that race, I have to think he is capable of winning this race, even off top weight.
Trainer Paul Nicholls loves this race and has won it four times in the last 10 years. It would not be the first time he has won the race with top weight either as Frodon won this race back in 2018. Harry Cobden takes the ride and he has chosen this horse over Saint Sonnet who was sent off 6/1 in the Paddy Power Gold Cup. I think that tells you the story of how good they think MASTER TOMMYTUCKER as he could have easily picked Saint Sonnet who looks fairly treated carrying 11st 2lb.
On his day this horse could go right to the top, I think he is proper horse. Had a few problems last year with concentration levels, falling a few times but that is now long behind him. He stays all day so the trip will be no problem and the Cheltenham Hill will bring the best out of him.
I expect him to bowl along in front, making lengths at his fences. It will be hard work up the hill with the weight, but hopefully he would have already slipped the field. E/W.
CHATHAM STREET LAD trained by the legendary Michael Winters is a fairytale waiting to happen. He is a right character and as shrewd a trainer as you will find. He really knows his horses and he is bidding to have his first Cheltenham winner. He has a great chance in CHATHAM STREET LAD in my opinion. He is rated 141 and will be ridden by Darragh O’Keefe who will carry 10st 10lb, a lovely weight.
He has had 3 runs this season over fences and put in a fine performance to win at Cork 3 weeks ago. A very good jumper he travelled smoothly through the race, winning with quite a bit in hand. That was over 2m and I think a step up in trip will be appreciated.
No doubt his trainer will have him absolutely primed to the minute and after the year we have all had, a story like this for a legend of the sport, would be welcome. I am a great believer in how things work out sometime and if this horse does go in, be sure to listen to his funny interview after the race. E/W.
A horse who is way overpriced is ANNIE MC. They could have run Sky Pirate in this race but have chosen to go in single handed with ANNIE MC off a mark of 142. This is a talented horse who won 3 races over fences last season before going for the Marsh Novice Chase at the Cheltenham Festival, swerving a couple of easier races. They clearly think she is a very good horse and possibly better than her current mark. Jonjo O’Neill has a decent record in these types of races, in particular the Paddy Power Gold Cup, the November equivalent to this race.
His son Jonjo O’Neill Jnr takes the ride and for me he is up with the best in the business. He could really be the next Tony McCoy, I think he is that good. He carries 10st 11lb which again is a lovely riding weight. With 6 places on offer and the huge odds on offer, it is a top class bet. E/W.
Good Luck
JPW Racing Tipster