You are here: Home / Subscribe / Festival special / Next festival 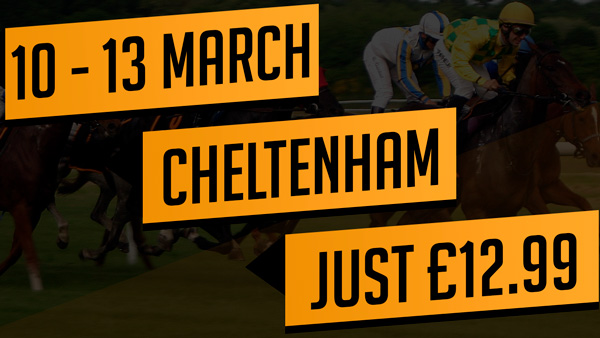 The Cheltenham Festival is nearly upon us and we are aiming to make it 12 years of profit in a row.

Everyone in the industry knows that when it comes to the Cheltenham Festival, JPW leads the way and we can’t wait to get the show on the road.

In the last 6 years here is the profit that has been made:

That is 175 points profit over a 6 year period, consistency at it’s best.

We’re looking to produce another excellent performance this time round, and improve on last year’s results, hopefully beating our best performance of 54 points profit.

Our stats for the 2019 Festival

Check out these stats from the meeting last year..

What can you expect from the Cheltenham Festival 2020?

We can’t give any guarantees that we are going to make profit in 2020 but we do have an amazing record of 100% profit, for twelve years running and are as confident as ever. We are as honest and trustworthy as they come and customers are at the forefront of everything we do.

Just so you know exactly, the type of information you will receive, here are just some of our best winners over the last two years, once again showcasing what we deliver, year in, year out and the very professional write ups sent out.

FRODON has just been amazing this season and has improved so much. He is now the complete horse who just keeps turning up and doing the business. He was a winner of the Old Roan Chase on his first start of the season and was then a very good 2nd in the Bet Victor Gold Cup carrying top weight. He then won the Caspian Caviar Gold Cup off a rating of 164 and was just sublime that day. His last start was again at Cheltenham just over a month ago in the Cotswold Chase over 3m 1 1/2 furlongs and was as game as they come from the front. His jumping is simply amazing and Bryony Frost gets the best out of the horse, the partnership is unreal. He will go from the front and now they no he stays 3 miles, I am sure he will go at some pace. He will makes others make mistakes and we know he loves Cheltenham and the hill. For a horse who has done nothing wrong this season and is trained by Paul Nicholls who horses are running well, the 15/2 on offer is a massive price.E/W.

Wednesday 2019
5:30 Champion Bumper
ENVOI ALLEN 7/2 generally – 2 POINT WIN
I think this horse is the real deal and you are looking at a future Gold Cup horse. The rain that has arrived has played to his strengths massively as he clearly wants a bit further and stays all day. He is 3 from 3 this season and has done everything asked of him. He is as tough as they come and for a bumper horse looks ahead of where he should be in his career. Jamie Codd takes the ride and they get on very well. I think he will win with ease if I am being honest and could go on the be a superstar. He cost a whopping £400k after winning a point to point race last year and there is absolutely nothing not to like about him. WIN.
Tuesday 2019
2:50 Ultima Handicap Chase
BEWARE THE BEAR 16/1 with Paddy Power and Betway – 0.5 PTS E/W (6 places, 1/5 odds)
BEWARE THE BEAR was a fast finishing 4th in this race last year and seems to do all his best work at the end of races. He went for a breathing operation in August and has had two runs this season. His first start of the season was in the Hennessy Gold Cup where again he was a fast finishing 4th of 12. It was a decent run but was much the same as what we have seen in the past. He then came to Cheltenham on New Years Day and looked a different horse, fitted with first time blinkers. They worked the oracle and he went from the front that day, jumped amazingly to score by 5 lengths. I was taken with the performance and more so the jumping as that was something he had struggled with in the past. The blinkers are back on and I imagine they will apply the same front running style as it seemed to work last time. He has not run since and I imagine Nicky Henderson has been saving his handicap mark at 151 which is only 1lb higher than last year, and he seems a better horse this time around. The ground will be fine as he has decent form on soft/heavy in the past and Jeremiah McGrath takes the ride who knows the horse really well. I am expecting a huge run and I am confident he can better his 4th place last year at the very least. E/W.

Next up is BLEU BERRY who will be ridden by Paul Townend another master in these handicaps. You only have to go back to his ride last year on Arctic Fire to see how good he is at decision making and then in 2015 when Wicklow Brave won the County Hurdle. Two fantastic rides I am sure the horses may have lost the race had other jockeys been on board. BLEU BERRY ran up three consecutive wins last year including a Grade 2 at Fairyhouse. He was then sent to the Grade 1 Champion Novice Hurdle at the Punchestown Festival finishing 5th the likes of Bacardys, Finians Oscar, Death Duty and Let’s Dance. That is four high class horses so Willie Mullins obviously thinks this horse is talented. I think he could turn out to be better than his handicap mark of 142 and he has only been seen once this season when finishing down the field in a handicap at Leopardstown when travelling well before blowing up. He needed that run and now the cobwebs will be blown off, I expect a big run. Willie Mullins is a master at getting horses spot on for one race and again I think this has been the plan for sometime. Massive value at the prices. E/W.

**Paul Townend was injured just before this race, with Mark Walsh taking over the ride**

4:50 National Hunt Challenge Cup Novice Chase
RATHVINDEN 7/1 generally – 0.5 POINTS E/W
I couldn’t leave RATHVINDEN out as I always kept coming back to him. Patrick Mullins takes the ride and he is one of the best jockeys in the race. He does have a slight question mark over whether he will stay the trip but I am willing to take a chance on the basis he is probably one of the more naturally talented horses in the race. He won 2 races at the start of the season by a combined total of 38 lengths and then chased home Death Duty in a Grade 1 at Fairyhouse only beaten by 3 lengths. He was brought down on his next start in another Grade 1 at Leopardstown, when still holding every chance. His latest start was in the Grade 1 Flogas Novice Chase where he was simply outclassed. In total he has run in three Grade 1 races so Willie Mullins obviously holds him in high regard. It is also worth point out that back at the 2014 Cheltenham Festival he chased home Faugheen in 3rd place so he has showed a liking to Cheltenham in the past. The ground will also be appreciated. As listed above the distance is a slight concern but if he can get into a nice rhythm and get some cover he certainly has the ability. The question will be what he finds up the hill. E/W.

Our Cheltenham Festival Special is just £12.99 for all four days – extensive and comprehensive coverage! Do not miss out.

Don’t forget we also cover 16 festivals each year and you can pay monthly for £9.50 which gives you a saving of almost £24.

You could even pay yearly for £95 and get all 16 festivals which gives you an even bigger discount.

Receive tips every day by email and by text message. Join