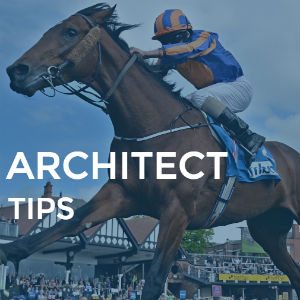 Architect Tips from our sister site www.tipstersempire.co.uk has kindly produced us a blog for the Welsh National.

A cracking renewal as expected having been rescheduled due to the cancellation on the 27th and instead of going through each horse (will be here all day) I will shortlist five i really fancy whilst including the three market leaders for guidance.

Mysteree will have strong support. Mysteree will love conditions, stays forever, has a good record fresh and has been aimed at this race for a while so there is every chance he will go close but do I really want to be taking 8/1 in a race that you need a lot of luck? Not for me so he is over passed.

Chase the Spud is closely matched with Mysteree, he won well last time with the runner-up Robinsfirth winning next time and we know the Spud loves the ground, stays well but my main worry is that he has run awful races here previously and he ran a shocker in this race last year.

Wild West Wind just doesn’t interest me at all if I am honest. He is improving fast and comes into the race in good form but he is unproven over further than 3m1f, and although he handles heavy ground, I don’t think his jumping is the best and he doesn’t look to me as though he will stay the 3m5f on testing ground. I might be wrong but he is way too short for this and I would rather take a chance on a massive price.

Vintage clouds will love the testing ground and he stays all day so won’t lack for stamina. He impressively won a 3m1f handicap chase at Aintree by 18 lengths on his seasonal debut before finishing a solid 2nd over a shorter trip last time off this mark only finding Clan Des Obeaux too good who then finished 2nd in the Caspian Caviar Gold Cup next time. Vintage clouds will have been targeted for this race by specialist Sue Smith and his form figures on soft or worse reads – 21122222F2. He is rock solid on this ground and Danny Cook rides who gets on well with this strong stayer. The pair finished a good 7th of 30 in last seasons Scottish National on ground quicker than ideal so he ran well under the circumstances. Vintage clouds is still on a decent mark and ticks plenty of boxes for this race. With a clear round I can see him going close and will be staying on better then most up the home straight.

Silsol is a huge price. He is a very classy horse and won a Grade 2 on his final start last year. He was a very good novice chaser during 2015/16 and was rated as high as 158 last year. Paul Nicholls horse would have needed his reappearance having his first run in over one year when down the field at Haydock. But that was a tough race anyway and he will have come on plenty for the run. Paul Nicholls has obviously targeted this race for a long time and the ground has come right for this 8yo has showed his best performances on ground soft or heavy. Silsol runs in this off a mark 147 back over fences which makes him seriously well-handicapped having been in the 150’s plus last year and was 156 last time out over hurdles. Bryony Frost won a Grade one yesterday and will be buzzing for this ride claiming 5lbs. I think Silsol has a seriously good each-way chance at double-figure odds. I can see him going off much, much shorter on the day.

Bishops Road finished 10th of 20 in this race last year but this time around he is 10lb lower and was last seen finishing a great race to be 2nd of 8 in the Rehearsal Chase at Newcastle on his seasonal debut following an 8 month break. He loves testing ground, jumps really well and won’t lack for stamina. He remains on the same mark as last time and he won last year’s Grand National trial over 3m4f on heavy ground off 144. Jamie Moore gets a good tune out of this 9yo and he one of few who will love conditions. He comes into the race this year in even better form than last year and I am sure he will finish much better than 10th this time. He looks a very solid each-way player for a yard who do well in these marathon races.

No 13 year old has ever won the Welsh Grand National but this one surely has the biggest chance of them all to change that statistic. This has been his target for a very long time and he run an absolute screamer to chase home Native River last year (high-class horse won off top weight then third in the Cheltenham Gold Cup). No other horse in the race could live with Native River but Raz De Maree made up so much ground down the home straight to be beaten one length and the pair put 15 lengths on the third horse that day. Raz De Maree runs in this year’s race off just 1lb higher so that must make him ridiculously well-handicapped with nothing the Calibre of Native River this time around. He loves testing ground, is proven over C&D and actually runs in this year’s race off a lower mark due to eye-catching booking James Bowen taking odd 5lbs. Although the stats are against Raz De Maree, I can see him running another very big race to try and go one better this time around and is a solid each-way contender.

Final Nudge could love this test. He ran well to be narrowly beaten in the Badger Ales last time over 3m1f on soft ground and has gone up 6lbs for that effort. He loves heavy ground with form figures – 211511 so won’t mind the conditions. I think he is a very strong stayer and Aidan Coleman is an interesting booking. Everything points to a huge run but my one worry is his jumping when under pressure. I think he needs to be ridden very aggressive and if he can get in the same rhythm as he did last time, then he must have a serious chance for a yard who have targeted him at this race for a while.

A tricky race to solve out of the five i really like, but I am going for three bets in a race representing a lot of value and have good each-way claims. BISHOPS ROAD is a solid choice who finished 10th of 20 in this last year off 154 on soft ground and will have learnt from that experience over C&D. He is 10lb lower this time and comes into the race in better form and is on his last winning mark which came on heavy ground over 3m4f at Haydock. He will love the ground and stays very well including the fact stable rider Jamie Moore rides again which is a bonus. I can see him finishing much closer this time around.
Paul Nicholls has a decent record in these contests and has targeted SILSOL at this prize for a long time. He was a classy hurdler, loves heavy ground and I am confident he will stay the full distance. He beat Native River over hurdles in a Grade two who then won this race last year so that is a massive form boost to the Paul Nicholls runner here, who has Bryony Frost claiming 5lbs. A recent pipe-opener over hurdles will have put him spot on and I think 33/1 looks way too big. His record over fences is good and if he can overcome the big field here which I think he will or Paul Nicholls would not run him then he must have an outstanding each-way chance and is definitely worth a chance at a big price.
Lastly, RAZ DE MAREE was second in this race last year off 139 beaten one length behind Native River with the rest well beaten. He was the only horse who could live with that high-class horse and this has been his target again ever since. He is only 1lb higher, loves the ground and is proven over C&D. This year’s race looks no stronger and if you take James Bowen’s claim into consideration (5lbs) then he is actually running in this race lower than last year which makes him very well-handicapped. Although he is 13 years old, he has run two back-to-back solid races to be second, recent of those over hurdles which will have put him straight for this and he must enter calculations at decent odds.
At Time Of Writing:
BISHOPS ROAD – (12/1) widely available, 4 places at 1/4 odds.
0.5 POINTS EACH-WAY
SILSOL – (33/1) widely available, 4 places at 1/4 odds.
0.5 POINTS EACH-WAY
RAZ DE MAREE – (18/1) with Stanjames, 4 places at 1/4 odds.
0.5 POINTS EACH-WAY
Architect Tips