You are here: Home / Subscribe / Weekend only service / One weekend 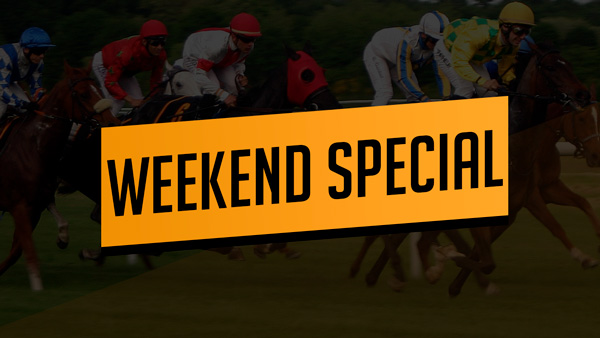 Where to start with our Weekends. We are absolutely flying along with our weekends in 2020 and August has been an excellent month, with 29 points profit. In 2020 we are 64 points in profit operating at a return on investment of 36.14%.

Remember although we do a single weekend, you can save money by signing up to 3 month, 6 month or 12 months of weekends and save yourself a lot of money.

You can also sign up to our Weekends and Festivals for 3 month, 6 month and 12 months, again saving a lot of money.

We have some great racing to look forward to this coming Saturday, Sunday and Monday. In particular we are looking forward to the multiple handicaps, where we often find some nice winners.

On Saturday we will be at Newmarket and Goodwood.

Sunday we will again be at Goodwood and Perth where I have my eye on a few over the jumps.

On Monday we will be at Ripon where they have a very good card.

This is not a weekend to miss simply top class racing which I am very excited about and sure to be plenty of value around.
We always go that extra mile and here is an example ebook of exactly how you will receive tips and the type of write ups to expect.

Despite no winners it was still a good day as we found 50/1 3rd, Tarboosh in the first race and a raised stake. We also had another 20/1 3rd in Mighty Spirit to come away with 4 points profit.

We were close to more E/W money as Berkshire Rocco was a short head 4th while Magical ran with credit in 2nd, behind the excellent Ghaiyyath.
Only two of our 6 horses today run bad races in Here and Now and Mutazawwed.
A full review will follow on Sunday/Monday.
For now we move on with tomorrow.

SACRED 15/8 generally – 2 POINT WIN
I actually make SACRED an 11/8 chance in my book so I will happily raise my stake to a 2 point win bet. I don’t think this is a strong Lowther Stakes and I think she is miles ahead of all of these. She made her debut at Newmarket at the start of June and won easily. She then went to Royal Ascot for the Queen Mary Stakes and travelled better than anything but gont done inside the final furlong, by the american trained horse, Campanelle. She pulled well clear of 3rd and it was an encouraging run given it was only her 2nd career start. She has not run since and I am sure she would have matured a lot over the last 2 months. She is now up to 6f and judging by her breeding, she should be even better over this trip. SACRED will be hard to beat and I would go as far to say I would be very surprised if she does get beat. WIN.
2:45 York
SIR BUSKER 13/2 generally – 0.75 POINTS E/W (5 places, 1/5 odds)
DEEP INTRIGUE 28/1 generally – 0.375 POINTS E/W (5 places, 1/5 odds)
We have 2 selections in this race.
I am happy to put a line through the run of SIR BUSKER, last time out. The ground obviously dried out too much for him and he is a much better horse with a bit of cut in it. With today’s rain he is going to get that and Good To Soft ground would be perfect. He has had 4 runs this season, winning his first two starts, including the Silver Royal Hunt Cup at Royal Ascot. He was then 2nd to Motakhayyel at Newmarket after having all sorts of problems. He may have won that day had he had a clear run. As I say his last run was not his true showing and he will be a much better horse on this ground today. He is rated 106 by the handicapper but I don’t think he has stopped improving yet. E/W.
DEEP INTRIGUE is a very interesting horse who is trained by Mark Johnson who had a very good day today. He has had 5 starts this season and has been getting better with every start. He started the season rated 89 and is now only rated 91, just 2lb higher. He is a much better horse than he was 5 starts ago and could be ahead of the handicapper. His last run was at Goodwood when 3rd to Toro Strike carrying 9st 11lb. He gave the winner 4lb and went down by 3 lengths. I think the winner that day, Toro Strike looks a decent horse and is now rated 101. What price would that horse be if he ran here?
DEEP INTRIGUE is ridden by Joe Fanning who also had a winner today and is right at the bottom of the handicap, carrying a tiny 8st 5lb. With that weight on his back he can run a nice race at a big price. E/W.
3:15 York
FRANKLY DARLING 12/1 with Paddy Power and Befair – 0.5 POINTS E/W (2 places, 1/4 odds)
Obviously Love is going to be very hard to beat as she looked a serious horse when winning the English Oaks but with the rain that has fallen, it is not ideal. I am going to give FRANKLY DARLING another chance and although she has a mountain to climb to turn the form from the Oaks around, looking back at the race, I am not sure Epsom suited her. I think a track like York which is flat and galloping will be right up her street. She was sent off as short as 7/4 for the Oaks and although put in her place, I have no doubt she is better than what we saw. She was a very good winner at Royal Ascot and looked a serious horse. If she can find that form again it makes the 11/1 look absolutely huge on a track which will be to her liking. E/W.
3:45 York
SEA OF FAITH 9/2 generally – 1 POINT WIN
Given the rain which has feLl today it is only going to play to the strengths of SEA OF FAITH who will just keep on galloping. She won two races last season but was a big baby and very immature. She has her first start of the season here and I am expecting a much mature horse this season, who should turn out to be a group class at the very least. I just think she is a better horse than these and has much more potential. She is a full sister to Raheen House so is obviously bred well and is the one to beat here. WIN.
4:50 York
ANNA NERIUM 12/1 generally – 0.5 POINTS E/W
This is a fillies handicap and a very poor one in my opinion. I think it is worth taking a chance on ANNA NERIUM who although has to carry top weight and give loads of weight away, she is a group horse running in a handicap. She has won 2 group 3s in her career  and has run well in defeat twice this season, in particular at Goodwood when 5th of 12 to One Master, in a group 3. This is a poor field of horses who will turn out to be no better than 90 while ANNA NERIUM is rated 104 and has been consistent at the top level, for a number of years. Ryan Moore is an eye catching booking. E/W.
Good Luck
JPW Racing Tipster

We do not take automatic payments. To resubscribe it is a manual process, giving you greater customer satisfaction; however if you wanted to sign up for a longer period and receive greater discounts, you can do so here.